The Marshall High School Clay Target League Team (MHS CTL) finished fourth overall in the 2017 Class 9A State Championship on Tue. June 20, 2017 at the Alexandria Shooting Park in Alexandria, Minn., and showcased some of the best shooting in the team’s history by multiple participants.

“Our varsity shooters have definitely arrived on the league’s biggest scene,” said head coach Nick Simonson, “and with only three of our top ten participants graduating, there is tremendous upside – the rest of the state is on notice,” he concluded.

Things started fast for MHS CTL in Varsity level competition, as Freshman All-Stater Tannyr Curry posted a perfect 50 in his first two rounds.  Fellow All-Stater Karter DeSmet and Derrick VanOverbeke, another Freshman, and Sophomore Nick Atcher added 48s, while Sophomore Isaac Callens and Freshmen Jarret Beebout and Dawson Reese tallied totals of 47 to round out the top shooters in the morning half of competition.

In the afternoon shoot, Atcher went on a tear, bringing home the team’s second perfect 50 of the day, and a reverse run of 67 targets straight, for a total of 98 as Curry logged a pair of 24s for a total of 98 on the day as well.  VanOverbeke bookended his shoot with a 25 for a total of 97, and DeSmet logged rounds of 23 and 24 for a total of 95.   In all of this, Freshman Dawson Reese quietly put up his best rounds of the season, including a perfect 25 in his final round for a total of 93 to make MHS CTL’s top five.  Top Varsity Shooters for MHS CTL were:

Atcher and Curry would finish the event tied for fifth overall out of 985 participants, and VanOverbeke tied for tenth.  DeSmet would end up tied for 26th and Reese and VanMoer would finish tied for 45th.

Overall, with a total of 481, MHS CTL finished fourth in the state’s largest class, based on high gun tiebreaker, just two targets out of first place and one target out of second place. The top two teams at the event were invited to the team competition at the State Tournament in Minneapolis on June 24.  Final overall standings for the Class 9A Championship were:

“As the saying goes, ‘every clay counts,’” said Simonson, “and though we came out on the tough side of that adage this time, our shooters should be very proud of themselves, as four years of focus, dedication and development are paying off,” he concluded.

MHS CTL finished eighth overall in the Junior Varsity division of the Class 9A Championship and was led by seventh grader Ben Geihl, who posted an 88 to lead that squad.  Top JV shooters for MHS CTL included:

“Ben will be one to watch,” said Simonson, “he’s got the fundamentals down, a ton of drive and he consistently works and competes with older shooters who have mentored him well,” he concluded.

In Novice division shooting, MHS finished 10th overall at the event and was led by Devyn Martzloff on a total of 77 to lead the squad.  Top shooters for MHS in the Novice division were:

MHS CTL will be represented by VanMoer, DeSmet and Curry in individual competition at the Minnesota State High School League Trap Tournament in Minneapolis on June 24, after qualifying for the event by finishing in the top 100 shooters (out of 11,400) by league average this year.

Sign up and informational meetings for the 2018 team will be held at the MHS Media Center in January of next year.  For more information on the team and to keep up with MHS CTL, visit their official Facebook Page: facebook.com/mhsctl.

Senior Ryan VanMoer and Freshmen Karter DeSmet and Tannyr Curry became the first MHS CTL shooters in the four-year history of the program to finish in the Top 100 of all participants in the Minnesota High School Clay Target League’s regular season and earn invitations to the State Tournament individual competition in Minneapolis, Minn. on Sat. June 24.  VanMoer, on a weekly total of 47 for League Week 5, finished the season with a league average of 24, the highest in team history and the ninth best average overall out of 11,400 shooters in the state for the 2017 season.  DeSmet, with a season average of 23.8, also qualified for the event with classmate Curry, who ran four impressive final league weeks to make the cut for the big event with an average of 23.5.

“The coaching staff was pretty sure about Ryan and Karter coming into League Week 5, but after running the possibilities, we realized Tannyr had a shot of getting an invite as well,” said coach Nick Simonson, “he came on strong in the last four weeks, and in the clutch did everything it took to punch his ticket to the big event; we’re thrilled for all three,” he concluded.

DeSmet and Curry traded perfect rounds and one-off 24s to lead the team in League Week 5 with totals of 49, while Sophomore Nick Atcher followed a perfect 25 with a 23 for a total of 48 and  a top-three finish.   Top shooters for MHS CTL in League Week 5 were:

The team average jumped by .5 targets over the previous week to an even 36, the highest regular season team average for a week in the history of the program, and more than half of the team logged at least one round of 20 in the final stretch of competition.  The team average total never dropped throughout the season and over eight weeks jumped nearly four targets, despite some challenging spring shooting conditions.

With his league average of 24, VanMoer earned this year’s Top Gun honors for MHS CTL.  With an average of 19.4, Junior Tessa Coudron nabbed the Top Gun title for the ladies in 2017.  Most improved on the year was Freshman Anna Timmerman, who nearly doubled her average to 15.9, adding 7.2 targets over 2016.  The Hot Shot Award for highest average for a new shooter in Grades 7 to 9 went to Eighth Grader Brock Schultz, with a league average of 20.1. In total, 31 shooters qualified for letters by maintaining a league average of 19 and staying academically eligible for the program.

Up next for MHS CTL is the Class 9A State Championship on Tues. June 20 in Alexandria Minn., an invitational-style event where 61 members of the team will attend and represent MHS against the biggest schools in the state with a chance to qualify the team for the State Tournament where VanMoer, DeSmet and Curry will already be representing MHS CTL in the individual competition on Sat. June 24, in Minneapolis.

For more information on the team and to keep up with MHS CTL, visit their official Facebook Page: facebook.com/mhsctl 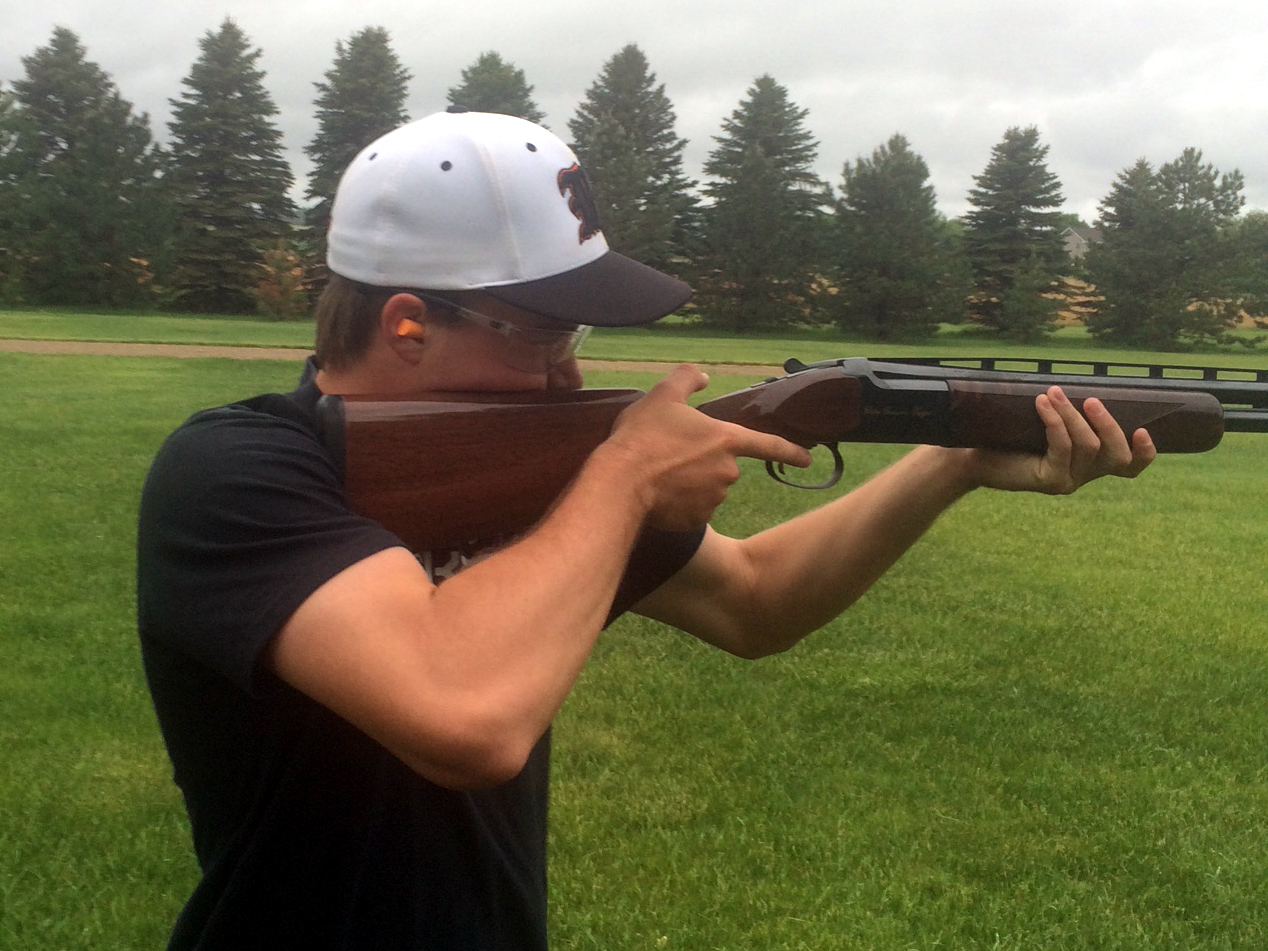 Senior Ryan VanMoer smashed 50 straight to lead MHS CTL, and all shooters in the state, in League Week 4 Competition.

Senior Ryan VanMoer crushed the season’s first perfect fifty to lead all shooters on the Marshall High School Clay Target League Team (MHS CTL), and all of Class 9A’s participants in League Week 4 of statewide competition.  With the accomplishment, VanMoer becomes the second MHS CTL shooter to log two perfect rounds in competition.  Additionally, Senior Carson Douglas logged a perfect 25, for a top three finish on the week.  With VanMoer leading the pack, the top shooters for the team this week were:

“Ryan has set the standard this season, he’s so involved in many extracurriculars, but always shows up, focused and ready with a smile on his face,” said Coach Nick Simonson, “he gets on stand and you get the feeling he’s having fun, and the rest – including his 24-plus league average – just seems to fall into place,” he concluded.

VanMoer’s 24.13 average after League Week 4 puts him in a multiple-way tie for the seventh best overall average in the state, and in the top 25 shooters of all 11,400 participants across the league.  On his pair of 24s this week, Freshman Karter DeSmet also lands in the top 100 shooters with an average of 23.63.  The top 100 shooters (and all ties) at the end of next week’s final league rounds are invited to the State Tournament individual competition in White Bear Lake, Minn. on June 24, following the nine-day State Championship event which ends with MHS CTL’s shoot day on June 20.

The overall team average total for MHS CTL jumped .2 targets to an even 36 this week, continuing a season trend of that number never dipping week-over-week.  Additionally, 26 shooters logged totals of 40 or more in League Week 4, a season high for that statistic.  MHS CTL remains in fourth place overall in Conference 2 of Class 9A, home to the largest and most competitive teams in the state.

For more information on the team and to keep up with MHS CTL, visit their official Facebook Page: facebook.com/mhsctl